Did you know that Chuvash speak a language related to that of Turkey?

Did you know that Attila the Hun may have spoken Chuvash? 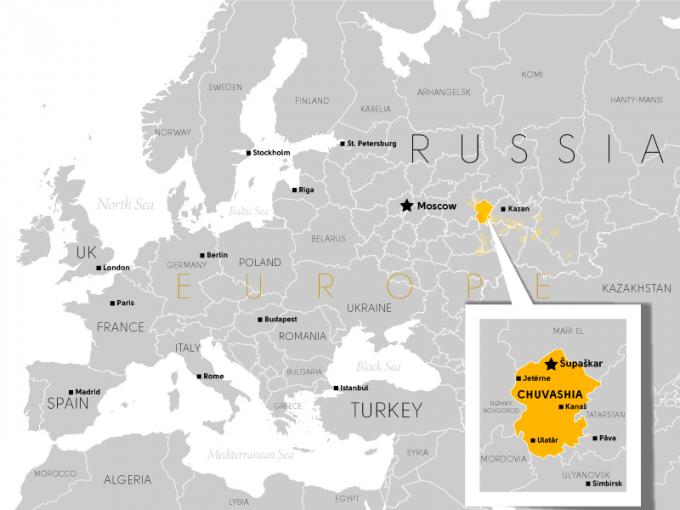 Chuvash (chuh-vahsh) is a mother tongue to some 2 million people in the world mostly settled in the Volga region in Russia's European side, 400 miles east of Moscow. It is a Turkic language, which means the logic and structure of it resemble that of Turkish, Azeri etc. However early separation of the Chuvash-speaking people some 2000 years ago made the language diverge so significantly that today a Chuvash person will understand a Turkish person just as well as an Anglophone will understand a German person. The vague sense of commonness is there but mutual intelligibility - no.

Chuvash is one of a kind in the Turkish family of languages - it is the only survivor of the Oghuric branch, which gave tongues that were most probably spoken in the ancient empires of Bulgars, Khazars and maybe even the Huns, including Attila the Hun whose domain stretched from as far as the Ural River in the East to the Rhine in the West, and from the Danube in the South to the Baltic Sea in the North. There isn't much memory left of Attila in the Chuvash folklore but the river Volga is called Atӑl to this day, not only that, but sometimes it is referred to as Atӑl Atte 'father Attila':

Chuvash language [CHOO-vahsh] (Чӑваш чӗлхи, also known as Chuwash, Chovash, Chavash or Ҫuaş) is a Turkic language spoken west of the Urals in central Russia. It is the most divergent of all the Turkic languages. Chuvash is the native language of the Chuvash people and an official language of Chuvashia. It is spoken by about two million people.

The most ancient writing system was Runic, which disappeared after the Volga Bulgars converted to Islam. Later, Arabic was used. After the Mongol invasion, writing disappeared. Occasionally, runic script was used. The modern alphabet was created in 1873 by I. Ya. Yakovlev. In 1938, the alphabet underwent a significant modification to its current form.

There‘s also Latin variants of Chuvash Alphabet, which are also used nowadays, but no official Latin script exists as it is not allowed in Russia for minor languages to have Latin alphabets officially. However, for the sake of making it convenient for English-speakers and those who don't know Cyrilllic letters we'll use CVLat, that is Chuvashized Latin Script on this site and Chӑvashtet:

We recommend CVLat as it has less symbols than the Russian Alphabet and flatters phonetic construction of Chuvash and is more understandable for both Chuvash and English speakers.

Foreign Influences
Though being a Turkic Language Chuvash greatly influenced by Finnic languages and Russian. In modern lexicon of Chuvash there are Russian, Tatar, Mari, Mongolic, besides Arab, Mongol and Persian words that were borrowed before Tatar and Russian invasions.
As the Chuvash Language is the only preserved language of Bulgaric group we can say that it lent Chuvash words in Russian, Mari, Tatar, etc. too. For example, the word книга /`kniga/ in Russian is borrowed from Bulgaric languages by Kievan Rus" People as Kiev once belonged to Khazaria, a bulgaric empire. In Chuvash language the word is kӗnеkе.