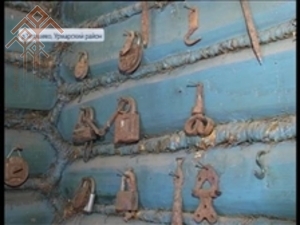 There is someone in Vӑrmar raion of Chuvashia who appreciates old items and collects them rather than throw away. Meet Sergei Grachev.

He has a real collection now. Made up of 19th century coins and banknotes, wooden tableware, bells, and keys... His countryside house turned into a museum.

An amazing person is Sergei Grachev. Someone who had a key to no lock would have thrown it away long time ago, but Sergei finds value in all old items.

His parents taught Sergei to appreciate antique from an early age. "There is no future without past", he was taught. And that is what brought up Sergei's passion for old stuff.

Many items in the "museum" are from grandma's treasure chest, such as şӑpata footwear, a loom, a drop spindle...

These items were passed down to Sergei Grachev from his father, who in return received them from his ancestors and relatives. The coins for instance are from 1811 and 1816. He was offered to sell them, but "How can you sell memories?" says Sergei. To him they are invaluable and he won't dare sell them because of his father who saw decided to keep them.

Sergei Grachev's friends and relatives always pleased come to see "the museum", and before the visit they raid their closets and cupboards and chests to see find something Sergei might value?