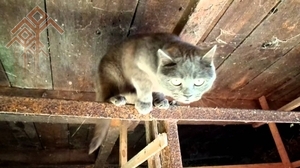 Villager Nikolai noticed noticed his cat behaving differently - it jump attacked adults - a week before the specialists of Rospotrebnadzor issued no animal was allowed to be brought out of the village for a month.

Not knowing what to do Nikolai traveled with his pet all the way to a veterinary clinic in the city. Upon examination the specialists rushed to tell the owner that he shouldn't have brought it in sick like that and that Nikolai should take it and leave.

Actually according to regulations they should have kept the animal because it would be quite apparent to a trained veterinary what it had - rabies! Instead they just prescribed to keep it separate from other animals.

When Nikolai came home he put the sick cat in a cage. It died in three days. The worried owner took the body of the dead cat to Roskomnadzor laboratory and finally learnt the cause of the disease, and not only that he helped contain the spread of rabies as Roskomnadzor issued a quarantine so that no animal would be taken out of the village for a month.